I intentionally forget things. I pack bad memories and experiences up on a fairly regular basis and funnel them away to be dealt with at another time, on another day.  Maybe.  I can do this and, as it turns out, I can do it with relative ease.  Debilitating heartbreak? Pack it down.  The world has changed forever? Forget and move forward.  Unpack later – or don’t.  Substitute the space left with a distraction or with something happier.  Dwell there.  Rinse, repeat.  Perhaps this is what my Alzheimer’s journey will be like; where I’ll keep making substitutions for the holes and the missing pieces.  I’ll just keep smiling holding onto the shadow of pleasantries long past.  I don’t know.

Most of the time I’m good.  I look back on all of the good things and I smile, I have context on which to hang my memories and, no lie, I have every reason to be thankful.  Still, every once in a while something hits you, unexpectedly.  Case in point: a friend of mine on Facebook posted this, “Do you remember (especially the CCS class of '87) what we were all doing on a very warm day 31years ago today?”  As it just so happens, I do.  It was the day we graduated high school, 6/19/87 and the world was going to hell.  My dad was released from the hospital, University of Penn, that very day.  A tennis ball, sized tumor had been scooped out of his head and I was about to start taking him for his radiation treatments for the summer.  He couldn’t make my graduation but that was okay, he was home with us again.  That was 31 years ago, today.  He was diagnosed with the brain tumor while we, my class and I, were on our senior trip only a few weeks prior.  Due to the aggressive nature of his cancer and the location of the tumor, the doctors did not hold out too much hope but it was a chance and we took it.  The sores, the hair loss, the erosion of conciseness & self (the insidious, cruel nature of diseases of the mind), the loss of speech, mobility, and his body’s failure - each took their toll.  He was gone five months after being diagnosed.  I was 18.  It was 1987 and the world went to hell.

Every now and again it is important to unpack.  I can say that you never get used to loss.  The world changes and it does not go back.  “Time heals all wounds” – this is a lie.  The world moves on with a hole in it.  This is how it is now.  Nothing can change it.  It doesn’t get replaced.  It is what it is.  So, I made remembering my mission because if I remember then he is still a presence – still an influence.  I am the only one who holds these memories and they will die with me but I have made a point to tell my girls about the man he was – the man he became.  I know it to be true that we do, in fact, stand on the shoulders of giants and that to know me is to know him.  Dan Fogelberg’s Leader of the Band, he sings, “I am the living legacy to the leader of the band.”  I weep when that song sneaks its way onto the radio or over the sound system of the supermarket where I may be shopping.  It hit far too close to home.  To this day, I weep.

The world can change a lot in 31 years.  It kills me that he has not been here to see it.  Paul Leo Scully would have been amazed at how far sweeteners have come.  No saccharin these days.  I have seriously missed his counsel during the last 31 years.  I have often wondered, “What would dad think about this?”  He would have loved Linda, my wife.  He would have absolutely loved his grandchildren.  I would like to think that he would have come to some sort of resolution with Paul & Susan – my half-brother and half-sister, the children from his first marriage.  He owed it to them.  He owed it to himself.  But none of this happened.  None of it could.  For unfathomable reasons, God or fate or the universe had other plans.  If there ever was a plan then healing was, clearly, never on the table.  In the song, ‘American Pie’, Don McLean sings, “And the three men I admire most – the Father, Son, and the Holy Ghost, they caught the last train for the coast, the day the music died.”  I was at the train station when they left.  The unfillable hole remains, and it always will.  I think of my father every day.  I have done so for the last 31 years.  Usually I don’t unpack so many things but today was special – it’s the 31st anniversary of my high school graduation.

My father’s life shaped me, and his death did as well.  I knew what mortality was early on.  I could see the precious, gossamer threads that hold together this thing we call life.  I knew from the age of 18 the importance of appreciating what we have, what we have earned, and what we’ve been given.  It gave me a different perspective than most of my peers and it still does.  I am beyond the unanswerable questions.  We are here and then we are not.  Make the most of that time.  It is precious.  Be kind along the way.  Be someone worth remembering.

Paul Scully II was one of the good guys.

He was my dad.

He came home from the hospital 31 years ago today.

Congratulations to Cumberland Christian School’s Class of 1987, wherever you are. 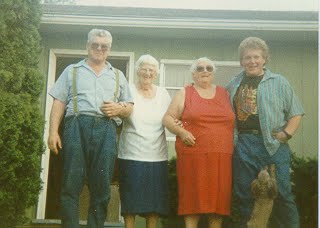 Labels: 31 years, be good to each other, Class of 1987, Dad, father, Fuck Cancer, remembrance, Thankful

Beautifully heartbreaking my friend. Much love to you!

Thank you for reading it. Much love, back.