Finally! Someone gets it – a working electric car and now, more than ever, for the right reasons. Surprise surprise, it’s not a big American carmaker… yet.

“Oh it will never catch on… It’s too expensive… Where do you go for repairs… It won’t work… Are you a tree hugger or something?” Do shut up. I’m not even saying please. I’m entirely too sick of people accepting the status quo just because it’s the status quo. Yes, it will catch on. Yeah it’s pricey – so were the first color televisions that are now about to become obsolete do to HDTV. Repair shops will respond to customer demand. Hell yeah it’ll work. Making the accusation of being a ‘treehugger’ may just be one of the least patriotic things someone could say concerning the issue of foreign oil vs. alternative energy. Prior to this electric cars were limited to about trips of 60 or so miles. The Tesla travels 250 miles on one charge. Oh, did I mention that it goes 0 to 60 miles per hour in 4 seconds?

“Did you say all the right reasons? Yeah that’s right. Putting the obvious environmental advantages aside the real beauty of this vehicle is to reduce our dependency on foreign oil. We’ve heard it all on the news but the fact is that other large countries (India & China) are clamoring for oil – the same oil that we are depending on for industrial residential, commercial and transportation needs. Transportation is a biggie folks. 63% of the oil we use here goes to transportation. Right here in the good ole’ U S of A we are over a barrel (sorry). It really doesn’t matter who has the reigns the Republicans (although having an oil man in the oval office doesn’t bode well for significant change any time too soon) or the Democrats; both parties like the status quo. Fortunately, there is still a thing called competition. Competition is one of the engines of progress. If there is a need to be filled that the big boys don’t see because they are too busy getting fat and rich it is still possible for the world to change with an idea or concept that the big guys choose to overlook. This is such a project.

Gentle reader we cannot leave this in the hands of big oil or the government. You want jobs? Let’s rebuild our infrastructure and base it on replenishable power sources. Can you imagine a world where we were not so utterly and completely dependent on the whims of madmen or oil barons? Wouldn’t that be a great world to hand over to our children? 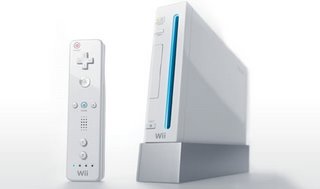 Dear friends allow me to share with you a few thoughts about the latest batch of “Next Generation” video game consoles. The Evil Chicken clan loves video games. There are three kids who range in age from 6 to 13 years of age. Of course it would not be prudent to not add their father, yours truly, into the equation. 4 out of 5 members of the EC-5 are gamers – we have been following the ups and downs of the big three, X-Box 360, Playstation 3, and the Nintendo Wii. All of these systems will deliver wonderful sound and graphics. Each has the third party software angle firmly in their pocket and each are vying for your dollar. So now for your reading pleasure and potential shopping enjoyment I present to you what the future may hold for your TV (HD or otherwise) in the near future.

X-Box 360. Great graphics, HD ready (which is quite startling when you see an HD image) and is ready for multiplayer glory around the globe. It is possible to go out right now and buy one; in fact BJ’s has a bundle pack with the game system and three games for $499.00. For the X-Box 360, this is a good price. Still, the X-Box 360 will not play your old X-Box games. I find this a bit of a downer. However, that new zombie game, “Dead Rising” that was just released peaked my interest and put Microsoft back in the running.

Playstation 3. Graphics, HD, out of the box multiplayer support and that’s not too shabby. Games, you ask? How does three generations of software sound? If you still have your original “Tomb Raider” PSX disc it will play on the PS3. Did you enjoy playing “God of War” on your PS2? Well, you’ll still enjoy it on your PS3. Sony is not making you pay for an entirely new library of games. Oh you will want to do the new games by their merit alone but it’s nice to know that the golden oldies will still play on your next-gen machine. There are two big problems with the PS3; first, it’s not out yet. Some estimations put the release date in 2007. Second is the price – there have been estimates that put the price between $600.00 - $800.00. Ouch. Of course Sony will also sell a stripped down version that will be without the tech bells and whistles that you really want for around $500.00. Ouch.

Nintendo Wii. Graphics, multiplayer support, wireless interface with the Nintendo DS (two out of three of the Three Chicks have ‘em by the way) and a price tag of $250.00. This makes Nintendo the cheapest of the next gen consoles. Nintendo has, with their “Nunchuk” controller, revolutionized the gaming experience. Think of the Nunchuk as an interactive remote control; in one hand you have a mouse with a thumbstick and in the other you have a remote control that responds to your movements. Let me say that once more, it responds to your movements. Tennis, golf, baseball, sword fighting, etc. each movement that would be done in real life is mimicked inside the game. That’s pretty cool. Sony and Microsoft are not even close to something an interface like this instead they have opted for their old controllers. Hey – way to break new ground! Oh yeah, and it plays your old Nintendo Gamecube games; which I might add we have a slue of.

So there you have it gentle reader. As you can probably tell I’m leaning towards the Wii. As time passes I’ll probably pick up a used PS3 in a year or so. Who knows; if Sony drops the price to something that I wouldn’t have to sell a kidney to afford I might make the jump. I respect the idea that they did not isolate the customer who has been supporting them for the last ten years or so. I just can’t or won’t pay their price to play. We’ve never had an X-box so jumping on now would be a good starting point but I have serious doubts that X-box 3 would play the games that I have invested in with the 360. That’s a sad business mentality. Oh well. For the EC-5, I do believe that there may be a Nintendo Wii under the Christmas tree. It’s cheap, powerful and will play the games that we have already bought as well as the new stuff. Those controllers aren’t too bad either. Check this out for yourself: http://www.youtube.com/watch?v=6RUKkWRK9gU. Yeah, they are pretty cool.